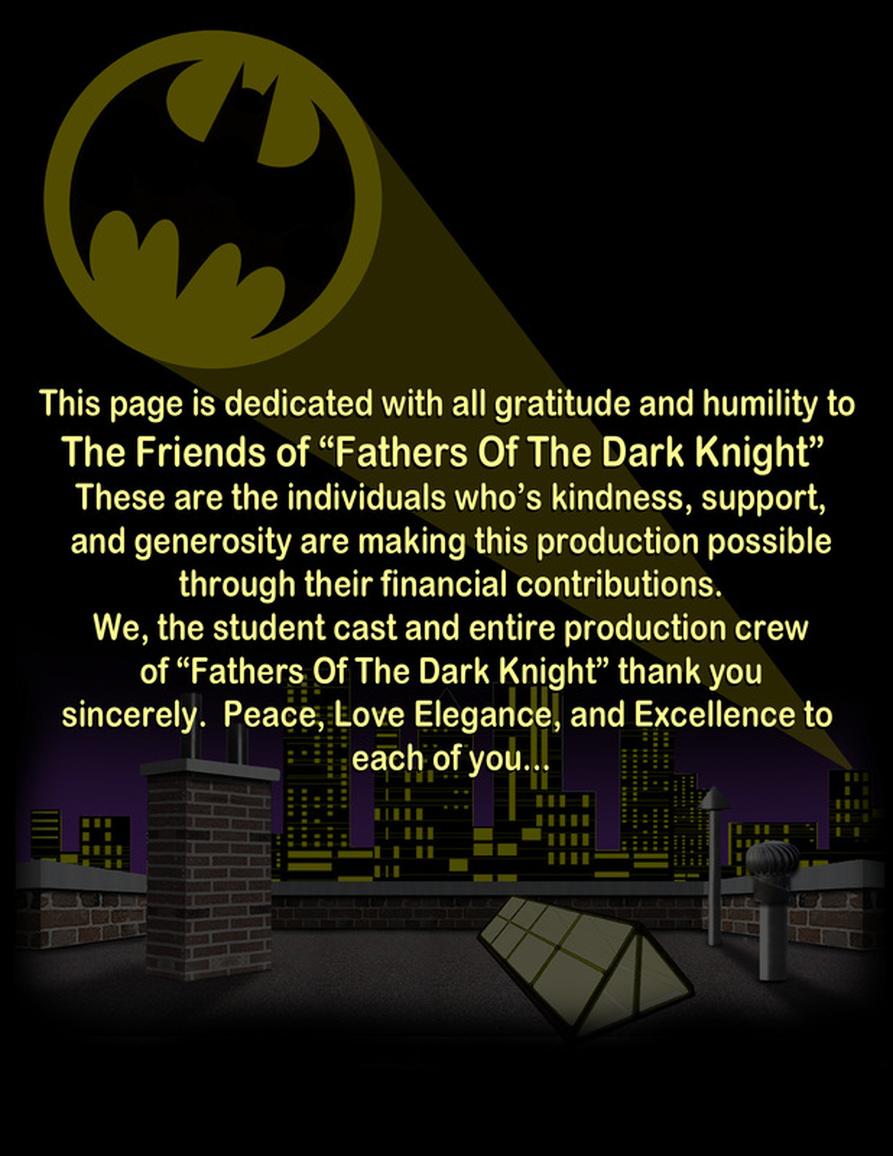 Special friendS of "fathers of the dark knight" 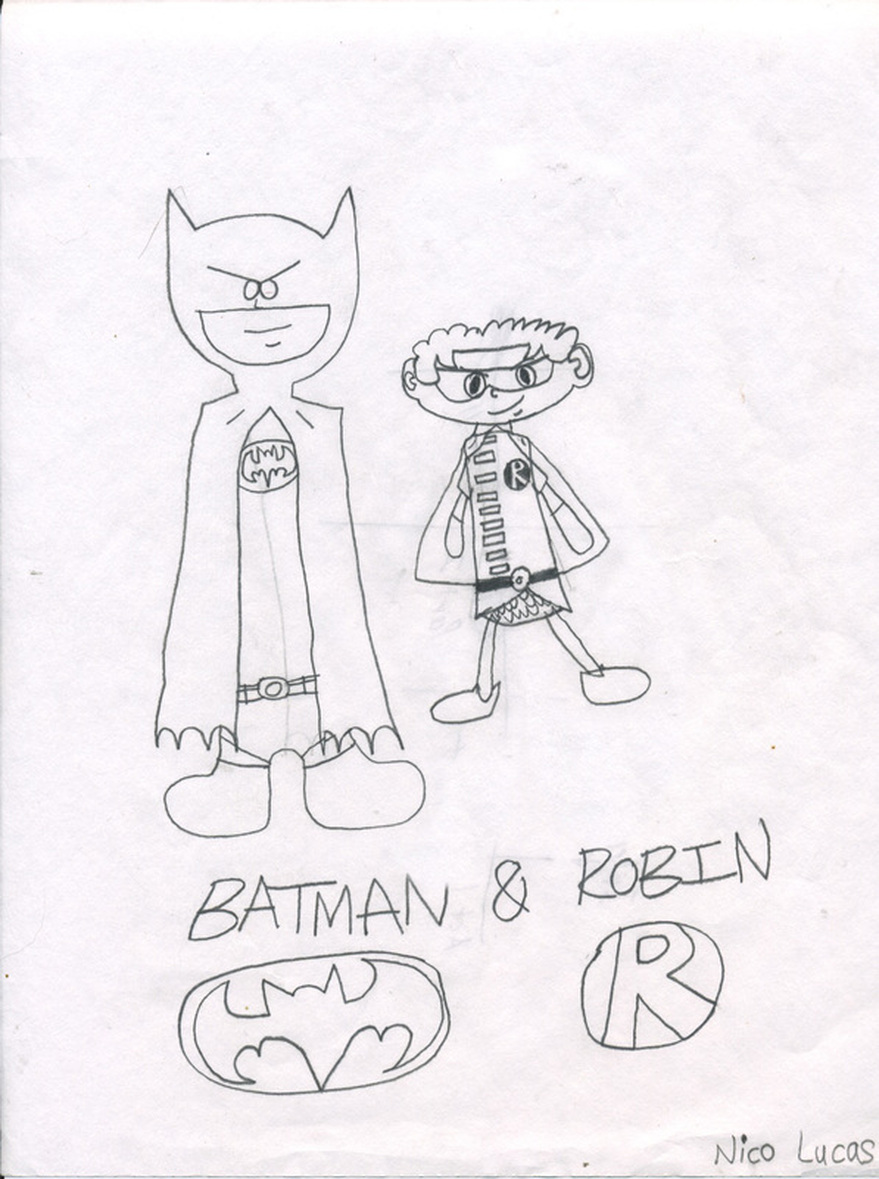 This drawing was presented as a gift to playwright, producer, and director Roberto Williams by 8 year old Nico Lucas of The Bronx, NY on March 30th, 2013 at the "Living In Sequence" Comic Art Gallery Event.  Nico was able to successfully identify all of the different boys who have become Robin The Boy Wonder over the years in the pages of the comics!!  He is a real Batman fan!!

We are proud and honored to name little Nico as our very special "Friend Of The Dark Knight"!  Thanks for the awesome drawing little buddy!  Free admission awaits you to come and see the show! 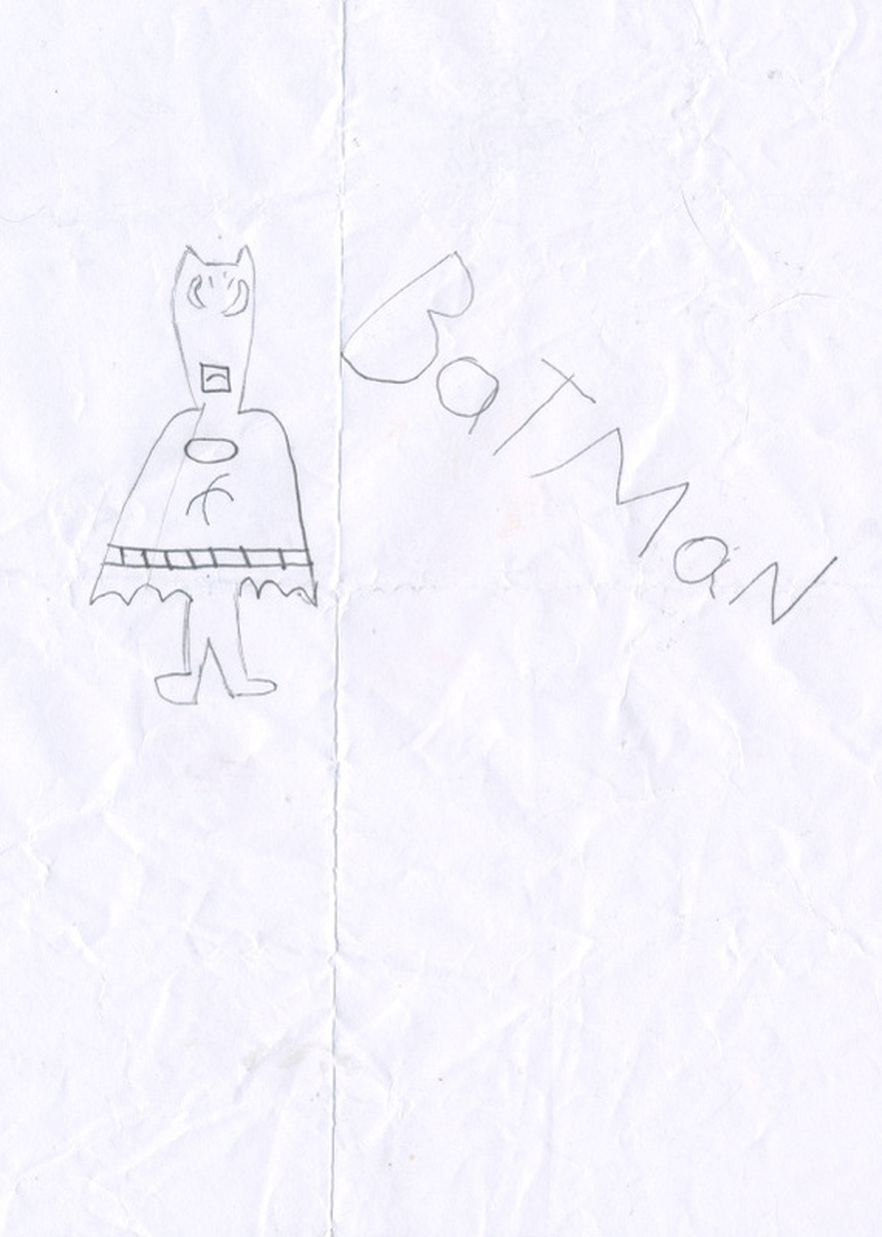 8 year-old Batman fan Skyler Chen paid a visit to a FATHERS OF THE DARK KNIGHT rehearsal on Friday, September 27th, 2013.

As a memento of his visit, the budding young artist presented this sketch of the Batman to playwright, director Roberto Williams.

We are proud to name Skyler Chen as our special Friend Of The Dark Knight, and award him free admission to attend the show! 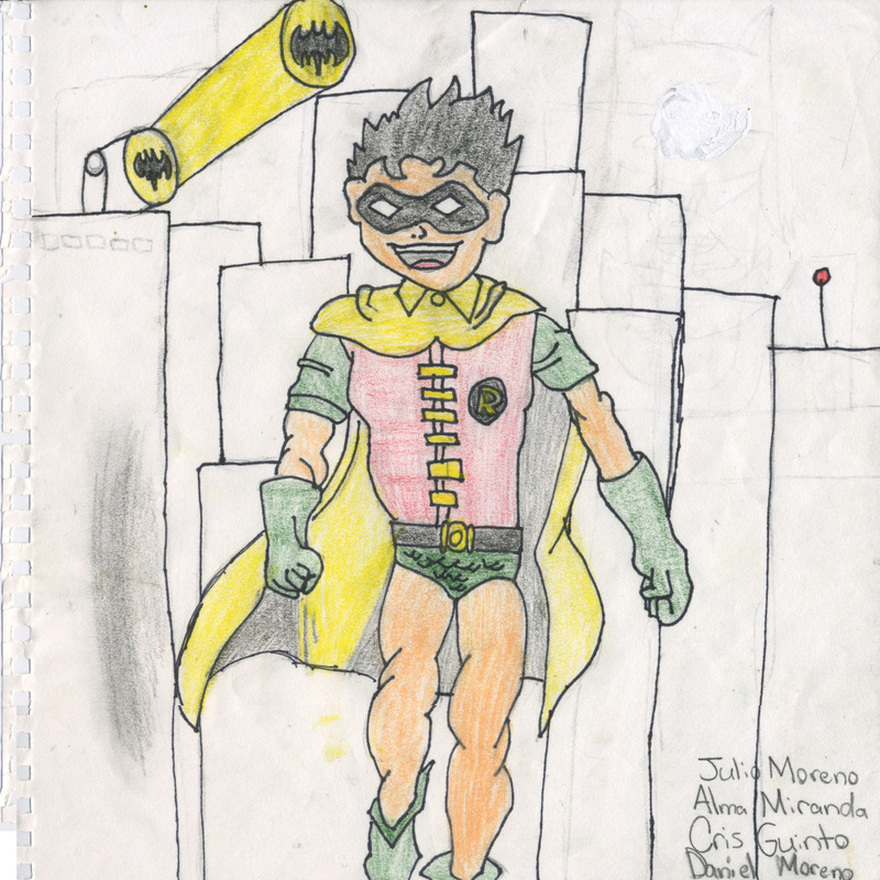 It looks like Mark Anthony Montalvo (Robin The Boy Wonder) has some really cool classmates as his friends, and they are looking forward to seeing him on stage in FATHERS OF THE DARK KNIGHT!  At Mark Anthony's first rehearsal for the play, on the afternoon of January 19th, 2014, the young actor presented Playwright / Director Roberto Williams with this beautiful drawing, created by some of his school friends.  We are proud to name Julio Moreno, Alma Miranda, Chris Guinto, and Daniel Moreno as our newest Special Friends Of The Dark Knight! You have all been awarded free admission to see the show! 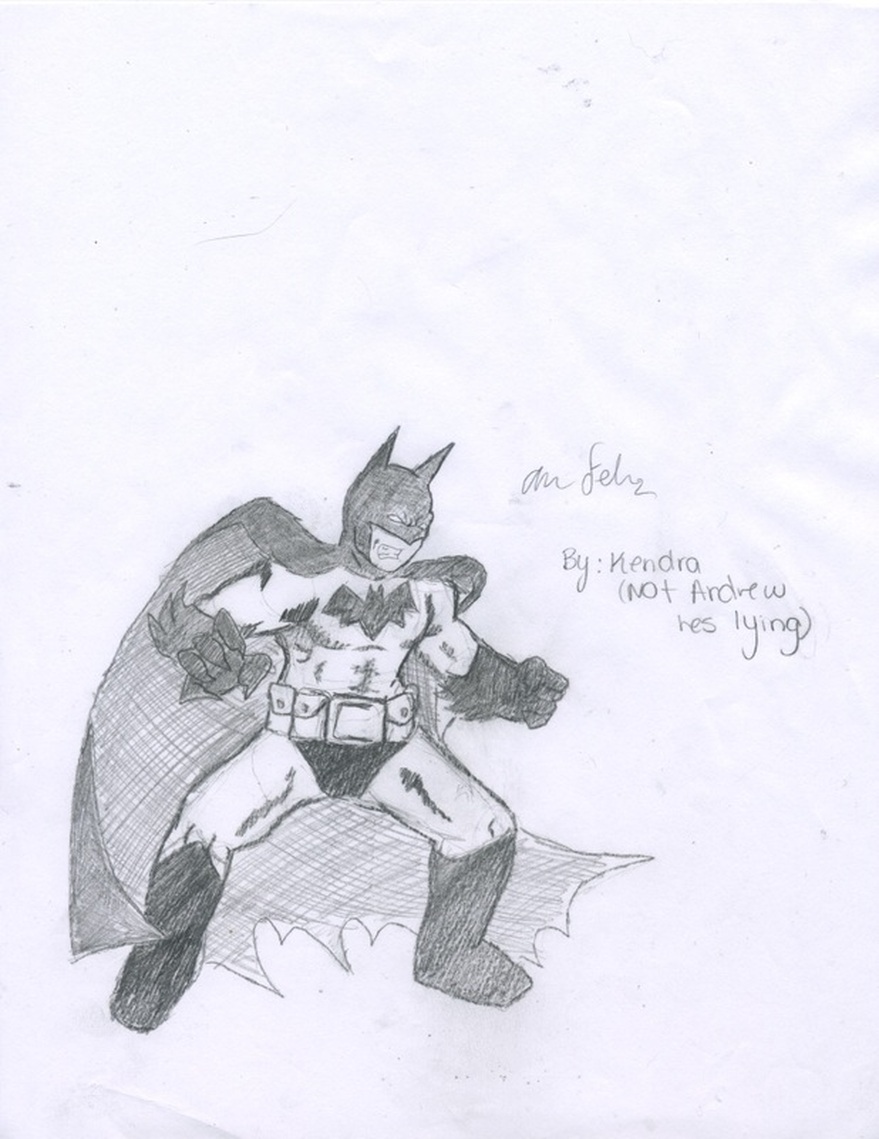 Here is another proud addition to the FATHERS OF THE DARK KNIGHT archive:
This Batman sketch was done by Andrew (The Batman) Davis Feliz, during rehearsal on the afternoon of Saturday 2/15/14.  Evidently, some, uh... moral support for this sketch was provided by Kendra (Batgirl) Avans. 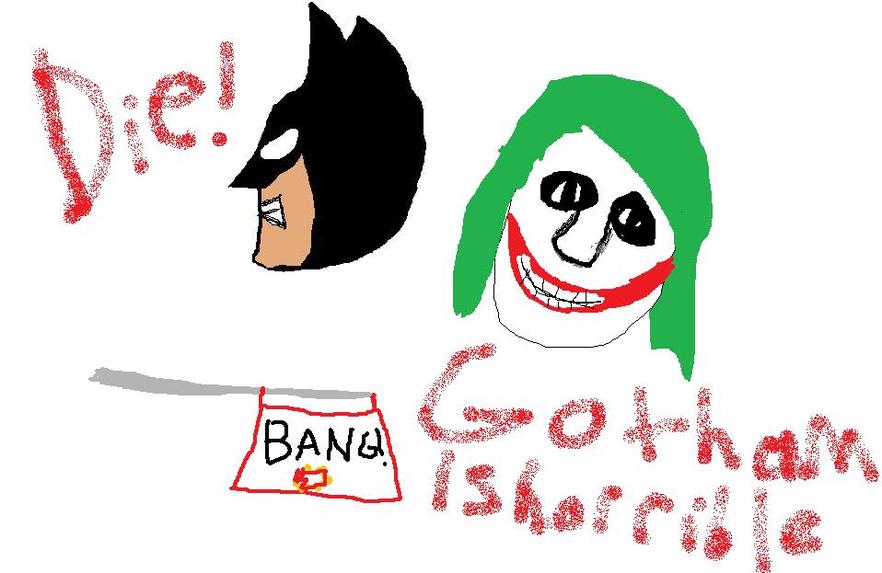 Evidently, our resident Robin, Mark Anthony Montalvo had JOKER on the brain when he rendered this digital image. Could it be that the nefarious Clown Prince Of Crime has turned The Boy Wonder against his mentor The Batman, and all the citizens of Gotham City??!!  Say it isn't so!!! 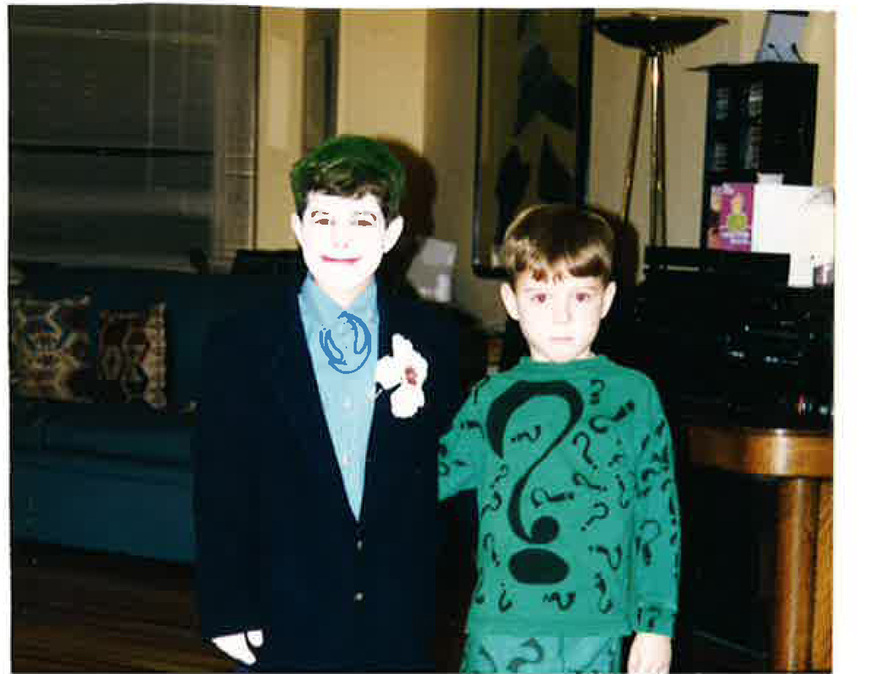 Don't let those evil villain costumes fool you!  These are two of the oldest and dearest Friends of the Dark Knight!!  Back in 1992, Playwright / Director Roberto Williams had the privilege, honor, and pleasure of serving as a private child caregiver for the Hoffman Family of New York City.  Their two young boys Cody and Max (pictured here) wasted no time at all in embracing Williams' passion for the world of the Dark Knight!  On Halloween of that year, they dressed as villains of Gotham City and The Batman's arch foes... The Joker and The Riddler! 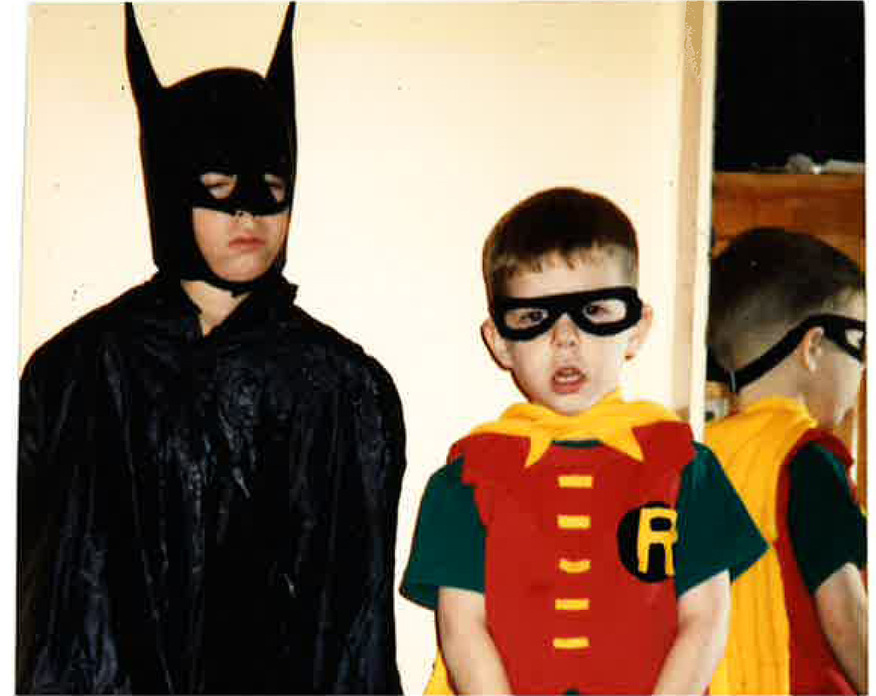 During Halloween of the following year,  Cody and Max Hoffman had a change of heart and decided to dress as the HEROES of Gotham City... The Batman and Robin The Boy Wonder! 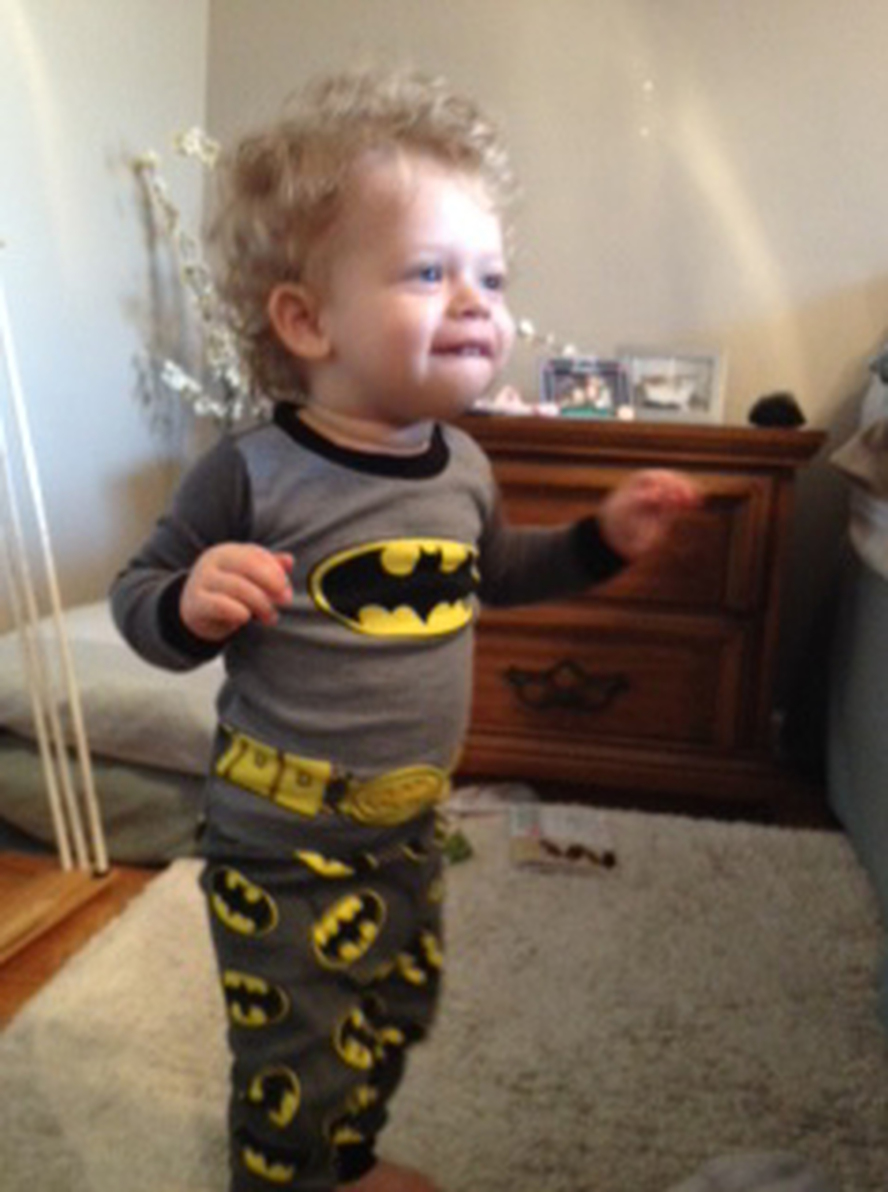 We are proud to announce our newest FRIEND OF THE DARK KNIGHT, Liam Allen!  As seen in this photo, his is all decked out in his crime fighting gear and ready to take on Gotham's worst villains!